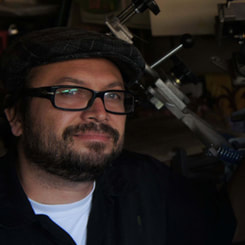 ﻿﻿Light Metaphors is the  Art of Thomas M. Schwabe  based in Santa Monica California. Combining an array of creativity, crafts, film, apparel, and literature. Thomas resources his visually creative inspiration from visions and inspiration that enter his heart and imagination. Growing up in Santa Monica, California, he began drawing at an early age, capturing the images of simple things around him, his creative mind was greatly influenced and shaped by the West Coast surf, skate, eclectic, spiritual and artistic community of  what is known as legendary Dog Town, the South side of Santa Monica California. He attended various art classes but was mostly self-taught. Later, Thomas was introduced to the airbrush. This was the fulfillment of a teenage vision and the beginning of a new artistic journey. For more than 25 years, Thomas has explored the possibilities of the airbrush, doing many custom projects on clothing, flags and banners, along with canvas works.
In 2008, he stepped into the field of digital Illustration. Much of his work is now created digitally, utilizing a professional pen tablet. He has created illustrations, business cards, flyers, art prints, and has worked for various individuals, non-profit  organizations, and small businesses. Thomas' spiritual journey reflects the artistry of his Maker who captured his heart with a picture of what he could be. Out of the ashes of a self-made life, Thomas discovered the creativity of the Creator and knew his love for art was a gift. Thomas' journey of discovery has been an ongoing revelation of the beauty and intricacy of the world around and within his Creator. Seeing with enlightened eyes and a new heart has given a perspective not often seen in the world of the arts.

As a Visionary, prophetic Artist, Thomas captures not only a picture but the wisdom that causes the work to speak, triggering the imagination, stirring vision and giving hope.
A seven-month internship with Streams Ministries International ﻿﻿http://www.streamsministries.com/ ﻿﻿was very conducive to the development of his DNA as a visionary artist, dreamer and leader. He discovered the power of dreams and metaphoric language as a valuable tool for leadership and prophetic creativity. Through his guidance, the team members in his worship and creative group discovered their unique artistic expressions and together were able to fulfill their purpose during the season of internship.

The light Metaphors Logo designed by Thomas was inspired by a visionary experience. This logo represents the Spirit of Revelation, a blue orb or eye and contains the Hebrew word (Chazah) meaning - envisioned in visions, to see, gaze at, contemplate with pleasure, behold, focus. Chazah was often used in relation to the ecstatic, visionary experiences of the Ancient Seers and Prophets. The Chazah logo is the genesis of the brand that now exists as Light Metaphors.

Life is full of inspiration, dreams and visions, take hold of your dreams and inspirations, run with them and express them, the creative energy is there in you! and when you begin doing what your were created to do the energy you receive will be greater than the energy expended.